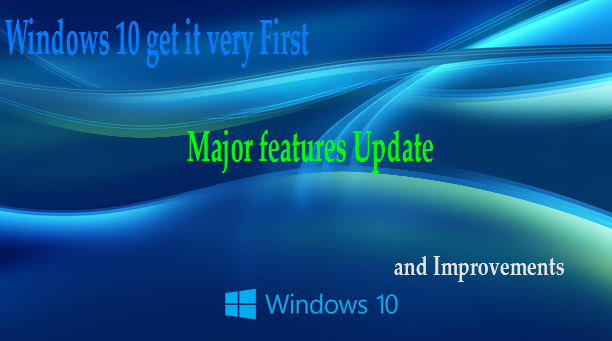 Windows 10 get it very first major features update and improvements

The very first major update for WINDOWS 10 is now here and available to Windows10 users in all part of the world. As was expected, The Microsoft released Build 10586 to Windows Insiders few days ago, the build was about bug fixing and general improvements.and Also, this Insider build did not put the Windows version watermark on the Desktop, so it was expected that this version would be made available as an update to all regular Windows 10 users.

Microsoft announced that Windows 10 is getting a major update. Most of the improvements are under the hood.With this free update.

As a normal user, one can experience some of these improvements:

Boot time is now nearly 30% faster than Windows 7 on the same device. So that’s a big boost in performance.

IT Pros and Enterprise PC:

This major update also empowers IT Pros.They want to maintain control and reliable quality of services. The update spans all device types thus enabling management of both corporate-owned and BYOD.

This update introduces two free services designed for IT.

=>The update provides better IT control over deployment within one’s organization without        compromising on Security at reduced management cost.
=>Setting up device groups with scaling and staggered deployments

The update provides more flexibility to IT to acquire, manage and distribute apps to Windows 10 devices. It includes both Windows Store apps and custom business apps.
Choice of preferred distribution method.

The update also provides new capabilities for IT to empower to use multiple devices effectively and securely. Mobile Device Management allows to manage the entire family of Windows devices that includes PCs, tablets, phones, and IOT. can also manage BYOD scenarios. Azure Active Directory Join empowers IT to maintain one directory enabling people to have one login and securely roam their Windows settings and data across all of their Windows 10 devices.

As can be seen, this major update brings improvements for all kinds of users. Announcing this, Microsoft said Windows 10 will continue to evolve over time. It also added that Windows 10 also starts rolling to Xbox One today and very soon to select mobile phones.

If you are already running Windows 10, you will receive this November update as per your Windows Update settings. And if you are a Windows 7 or Windows 8.1 user, One can upgrade to Windows 10 for free as per the free offer and get this update as part of Windows 10 upgrade. Once upgraded, your Windows version will be 1511 Build 10586.3.