Real Fact: How To Run Whatsapp On New Nokia 3310

The Request for WhatsApp Nokia 3310 is now getting really serious since the announcement of Nokia 3310 launching at Mobile World Congress 2017. Nokia 3310 is one of the most popular models in the mobile history. 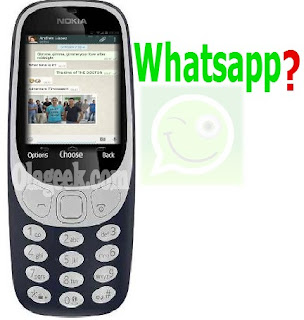 Why will you what to install whatsapp for Nokia 3310

WhatsApp is the most popular and most used messaging portal. More than 1 billion people in over 180 countries use WhatsApp to stay in touch with friends and family, anytime and anywhere.

WhatsApp is free and offers simple, secure, reliable messaging and calling, available on phones all over the world. This messaging app almost used by everyone.

HMD claims it did the best it can to recreate the original 3310 rounded shape and silhouette. Well let accept that at least to some degree they tried. Thou the New Nokia 3310 has a very slight change in design when compared to other Former Nokia 3310 devices.

It has a plastic body design, curved window with polarized layer for good and better readability in sunlight. Available as both single SIM and dual SIM variants. The new plastic unit measures 115.6 x 51 x 12.8 mm and tips the scale at around 79.6g.
The device comes with diagonal 2.4-inch full color Capacitive display with a resolution measuring 240 x 320 pixel LCD which is certainly a big improvement over the monochrome screen of the old original Nokia 3310.

It also spot Beautiful rounded number keypad and iconic push buttons, shaped design. Headphone jack for your tunes2.4”. also round edges to make the device fit well in your palm.

The new Nokia phone runs on an undisclosed but good performance processor and RAM combo runs the show on the 3310. Which is definitely enough for the Nokia Series 30+ OS.

Additionally, it also sports a 16MB ROM (internal storage) which allows installation of some light version applications. This device comes with some already pre-installed applications talking about the Call Logs, Contacts and Messages. There is an Opera browser also included. Users in some regions, will be able to download light versions of Twitter and Facebook and install.

All the bundled apps on the Nokia 3310 seem to work just fine and load fast. Scrolling through was easier using the custom-styled UI D-pad. unfortunately, it comes with just 16MB of internal storage, some of which is used up by the OS and apps. The internal memory can be boosted by a secondary storage SD card up to 32GB microSD.

If you were able to get the 32GB microSD add up, there is an MP3 player you can use for music. FM radio is also an option. You also get the chance to use a wired pair of headphones to the 3.5mm jack or even a wireless pair, through the Bluetooth 3.0 radio, with SLAM.

The phone has a built in storage of 16MB which can further be expanded up to 32GB using its microSD card slot. It also crams in undisclosed RAM, Nokia Series 30+ Operating systems.

Itsports a 2MP back capturing camera With a LED Flash.

Removing the back cover, spots a 1,200mAh removable battery, it still OK to handle it features.
Battery life is rated for up to 31 days of stand-by.
22 hours of talking and 39 hours of FM radio.
51 hours of MP3 playback.
Charging is done through a standard Micro-USB port.

How to install whatsapp on the New Nokia 3310

I Need to be very honest, Am very sorry to inform you that Nokia 3310 runs with S30+ operating system which doesn’t support apps like WhatsApp.

Thou it does have a very basic internet connection through the Pre installed Opera Mini Browser which comes with the Phone from Factory. So, You can access Facebook and other social networks from it, But those not support WhatsApp.

PleaseNote: Officially S30+ operating system on which the Nokia 3310 runs generally don’t support apps like WhatsApp!!! BUT Still You might have Trick fixing this problem. Please kindly feel free to forward to our contacts.

We will write about the breakthrough solutions immediately and be rest assur we will give your full credit. THANKS!!!
* Do ensure You Shear, Subscribe and Come back for more Premium Guides. Please don’t hesitate to Share. Opinions, Experiencee, Sourgestion and of course questions please drop all in the comments section below.