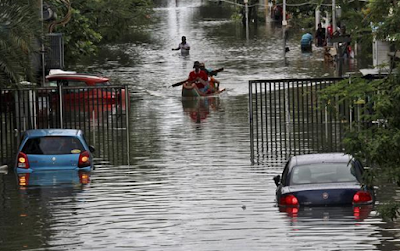 India’s second largest IT Center was rain disaster losses over 150 billion rupee
December 8, Indian IT companies in Chennai Cognizant will announce $ 10 million donations for the reconstruction. There will also provide a total of $ 30 million in loans and borrowings, to help employees and partners Chennai.

Currently, raging in India’s second largest IT center in Chennai floods recede, Chennai Airport restore navigation, sent to Delhi and Mumbai, in addition to individual train line has not recovered, the other train lines have been restored to normal transportation, city buses and Metro also has gradually recovered. Milk supply back to normal, the government has organized a force of anti-diarrhea drugs and infectious diseases issued to victims in the affected areas. But Chennai schools, factories, and enterprises are still in shutdown state. 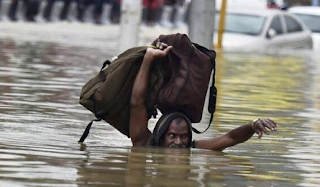 In the hardest-hit suburb of Chennai, a rare sunny, with tide subsided, the land finally exposed. Previously, the city has been soaked in the flood nearly a month. Continuous heavy rains, clogged drainage system, let Chennai and Tamil Nadu where Banging suffered more than 150 billion rupees (about 15 billion yuan) loss, 460 million people were affected, 325 people were killed. Houses were soaked in water, in the most violent storm on December 1, raging floods, water surge, traffic gridlock, water and electricity interruptions. “Before this case is the rainy season, rains already much, but as this year are under the continuous day, and the emergence of such floods and emergency situations, there has never been” in Chennai have been in the station for three years, said Li Mingfei.

Chinese enterprises in India are also affected to varying degrees the rain disaster, Tianma Group, the wheel of shares, ZTE and others have many employees trapped. Fortunately later are the safe escape.

Chennai streets full of garbage and silt, workers, employees and government workers are on the streets, began to clean up their homes.

Chinese employees of life and death to rescue

Raging disaster in the rain, many of the Chinese employees trapped.

According to the resident director of Sinoma International Indian subsidiary Li Mingfei 21st Century Business Herald said, in Chennai funded enterprises mainly Sinoma International, wheel of shares, blond technology, ZTT, ZTE and other. Also, Huawei is a local Chinese factory has more than 30 employees, as well as opper, Vivo sales team a dozen people. Also, in Chennai Chinese people have something to Chennai on business, as well as exchange students from Wuhan University – which dozens of students trapped in Chennai airport.

Most people are trapped in the wheel of the shares. Wheel of shares in Chennai factories, more than 200 workers, including more than a dozen Chinese people. Also, there are some Taiwan-funded enterprises in Chennai.

1st night, Tianma Group employees in several Chinese Chennai travel, a pedestrian car is heading to Bangalore, the heavy rain suddenly intensified. Along the way, the ground water level all the way up, the car to the outskirts of Chennai when completely broke down, there is very desolate periphery, plus have the whole city off from the nearest hotel is also 20 km away. Seeing the car about to be flooded, the staff had to climb these horses next to another car broke down a bus, seek help.

Tianma Group employees among emergency contact on the Chennai-funded enterprises to seek help.

“They contacted a friend in Delhi, Delhi friends find Xie total blond technology, we just together. At that time the situation is very urgent in Chennai Chinese people have a micro-channel group, there are more than 100 people, we organize in the group rescue, “Li Mingfei said.” We played all the Tamil Nadu rescue call, contact the local police force, looking for a variety of local friends to find solutions. Traffic disruption, only to find a motorboat to pull past them out. But at that time it was late, it is difficult to find the boat, all of us are anxious, we are all a sleepless night. “

Fortunately, later gradually smaller water potential, people coming dawn, the water level lowered a bit, Tianma Group employees to find a car in the vicinity, arrived safely in Bangalore. Wheel of shares of more than 200 factory workers, rescuers have been rescued by a big truck out, ZTE employees trapped in the building, in the Wednesday night was the safe transfer out.

“Detroit of South Asia,” the loss of over 150 billion rupees

According to the Federation of Industry of India, India’s rain caused the disaster to more than 150 billion rupees of loss.

Chennai is India’s second largest IT center, second only to Bangalore. Chennai’s software services industry, it can be very extravagant to the workplace moved to other places. But for the manufacturing industry, not so good luck

“The situation is terrible, we are still not sure of the details of the loss of equipment,” CII Tamil Nadu Chairman SN Eisenhower8日对印度媒体说, “Most of the factories and offices have been discontinued, the pipeline for cargo system, is unable to bear the loss of discontinued, but we do not know how long it takes to recover the entire supply chain system. “

“Chennai biggest problem is the drainage system, half an hour of rain is enough to make the city’s drainage system collapse,” 22-year-old MBA student Sai Prahlad in the Indian federal government website commented.