HTC is preparing to introduce its first smartphone with a screen of 18: 9, which will belong to the U11 family. It is expected that U11 Plus will receive 6 “screen with QHD + resolution, Qualcomm Snapdragon 835 chipset, 4 or 6 GB of RAM and 64 128 GB of internal memory (depending on the version), 12-megapixel and 8-megapixel camera, fingerprint scanner on the back panel and Android Oreo “out of the box.” At the base of the Chinese regulator TENAA, a record was found on October 19, the main character of which is obviously the new flagship of the Taiwanese, but there are no confirmations of the above characteristics, but there are pictures of the sample in black on four sides. Traditionally, the photos are rather poor quality, but even in such a way de confirms the design of the rear panel, a single camera module and a new location for a fingerprint sensor (for U11 and its predecessors, the scanner is integrated into a button on the front panel). The nearest event HTC will be held on November 2. It is on this day that the U11 Plus debut should take place. Do not miss the premiere of one of the latest high-end devices this year! 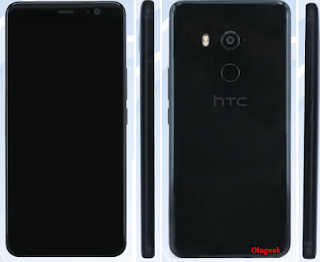