A few days after the release of the smaller Pixel 2, the Pixel 2 XL has been getting pretty negative reviews from all over the world. Recently we talked about the Google Pixel 2 XL display faded after a week of use and additional menu button in the new Pixels which turned out to be a bug! Now, a new problem is here for the Pixel 2 XL. The primary issue is related to the bigger Pixel 2’s screen. There is an absurd tint in the shade of blue and poor color reproduction in the Pixel 2 XL and honestly, we couldn’t imagine anything worse than this!

What is more worrisome is the fact that this happened just after a normal usage of seven days. Google has been standing in a questionable position since the issue has surfaced and many leading websites have been voicing out their concerns about it. 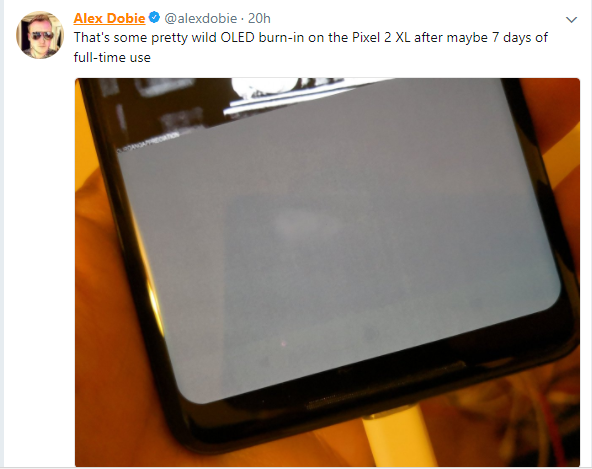 Let’s dig deeper and understand the problem in detail.
A screen burn-in happens when the screen stays for a longer time than intended to produce a “ghost image” of the action that was actually closed. So, even if you move to the next app or action, the screen will continue producing the image of the previous one. This issue is more common with the LCD screens. An image of the Google Pixel 2 XL has been released which clearly shows the screen burn-in where the navigation bar is vaguely visible. The most recent report and this picture were uploaded by Android Central and we can just sit back to wait for its correction!

The ghosting issue is also called image retention and while it is temporary, the screen burn-in is a permanent problem. The reason behind this is that while different images can be retained for a small duration of time, they’ll eventually go away. But in the screen burn-in issue, it will keep forcing the images to retain themselves.

Screen burn-in is more prominent in OLED displays but there are probabilities of an LCD display getting it. Similarly, while ghosting is more prominent in LCD displays, an OLED display can get it too. The issue with the new Pixel 2 XL can be a ghosting problem and if this is true then it is temporary. It is worth mentioning that the PIXEL 2 XL has a P-OLED display and so it might be having the ghosting issue than the more serious screen burn-in problem. However, we cannot be sure about the nature of this problem.

What is absurd is the fact that it has started happening in just seven days of usage while the other OLED displays are known to get it after a few year’s usage. What made Google Pixel 2 Xl exhibit such issues, no one can say right now.

Google has reacted to the issue by clarifying its stance on The Verge. The official statement read – “The Pixel 2 XL screen has been designed with an advanced POLED technology, including QHD+ resolution, wide color gamut, and high contrast ratio for natural and beautiful colors and renderings. We put all of our products through extensive quality testing before launch and in the manufacturing of every unit. We are actively investigating this report.”

Last year, the same burn-in issue happened with the Google Pixel and people were given the replacements under warranty on the spot. We are still wondering if this will be the case with the new Pixels as well.

We should basically not judge Google on this since the issue hasn’t been properly investigated and we don’t know about its exact cause yet.

Are you using a Pixel phone? What are your expectations from the Pixel 2 XL now? Let us know in the comments.