Gionee S10, a sucessor to Gionee S9 has been launched by Gionee. lot of smartphones with dual rear camera setups have been released lately from different Smartphone manufacturing company. Now Gionee has set out the gionee S10 to joined the league.
The smartphone is another finely finished device with Good specs from manufacturer, features four cameras dual camera setup on the Front and another two rear cameras at the Back. 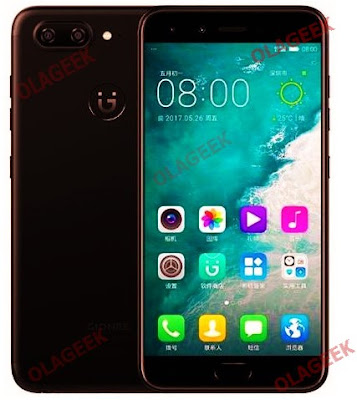 The smartphone has been launched in three variants – The regular S10, S10B, and S10C. Let’s talk on the regular variant of the Gionee S10, The unique selling point of this phone is its camera department. The smartphone features a 16-MP sensor and an 8-MP sensor at the rear with 6P lens and f/1.8 aperture to improve low-light performance. Take a glance through look at some of the key features of the smartphone before we move ON.

The Bottom of the smartphone packs a 3.5 mm headphone jack on the right and at the center host the USB Type-C port for charging. Gionee S10 features a Super, Full HD IPS LCD capacity touchscreen with display measuring 5.5 inches. The display resolution is pegged at 1080 x 1920 pixels resoluted screen.

Powered by Mediatek MT6757T Helio P25 CPU, Running on Android 7.0 Android Operating system. GPU – Mali T880.
The internal memory of this device is pegged at 64 GB, which can be expanded up to 128 GB with the use of a micro SD card. Overseeing the smooth running of the device is the impressive 6 GB RAM.

The Photography Front camera of this device is 20-megapixel + 8-megapixel dual-rear camera with phase detection autofocus to brighten captured. At the back of the device is mounted 16-megapixel sensor and an 8-megapixel sensor at the Rear Back camera of 13 MP. Some features of this camera include Touch focus, Auto Focus, Face Detection, Panorama Mode, Geo-tagging, Digital Zoom, Video Recording and HDR. Powered by a 3,450 mAh battery.

Gionee S10 B smartphone also feature dual camera setup with a 13-megapixel and 5-megapixel sensors at back and a 16-megapixel sensor at front. S10B runs on Amigo 4.0, 5.5-inch full-HD display, and is powered by a MediaTek Helio P10 processor coupled with 4GB of RAM, 64GB of in-built storage and 3700mAh battery.

Gionee S10 has only been launched and made available in China at a general price of 2599 Chinese Yuan ($379 USD). But not yet available in Nigeria, Ghana, Kenya or India. When available, you can buy the Android phone at leading online stores in the countries.