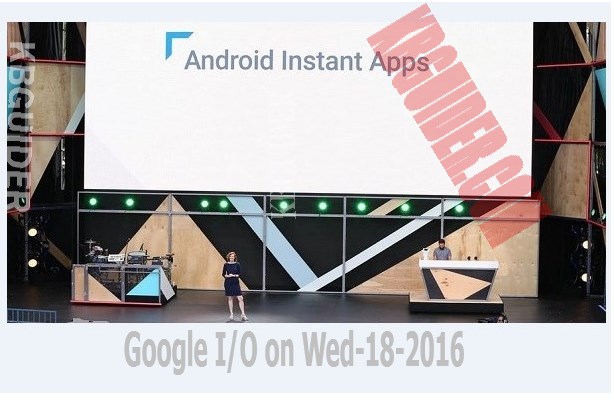 What if we didn’t have to download an app before using its features?
how sweet will that be? When you don’t have to keep an app around just for occasional use, without wasting your phone’s precious resources.

This is really really great idea, especially for android users with low on space on their phone. There are so many apps that are great to use every now and then, but that absolutely don’t need to occupiers your whole phone Storage,Some app can even start building a real estate on your device. with this new feature announced by Google. If you need to use an app, you can open it without having to install it.

All Participating apps will be designed with modules, and Android Instant works by splitting apps into modules. Google Play will then determine what needs to be downloaded and what can be streamed from the web at the tap of a button. The idea is you could click on an app icon and use it, the same way you could visit a website.
so when you need to use an app you don’t have installed, it can be loaded quickly and with as little data usage as possible just by downloading the needed modules. This would provide the user with a better, more robust experience than using a mobile-optimized webpage.

The very first example: showed the user clicking a Buzzfeed Video link to view a recipe and being transported to the appropriate part of the application, all in about two seconds.

The Second example: the presenter used B&H’s Android app to show a complete search to purchase cycle of a camera bag on the company’s app. No app installation took place during this whole process and after a total of three clicks, and about 27 seconds, the demonstrator showing how it works has purchased a new camera bag.

The demo was done on Android device running version 4.4 KitKat. But it’s expected to be backwards compatible and run on any device running Jellybean or newer, Once released.

Google expects to roll out Android Instant Apps “later this year”, and be available on devices with Android Jelly Bean Upward.

*Do you have anything to add to this story? Please don’t hesitate to Share it in the comments box below.