Samsung has announced a new flagship chipset series Exynos 7, which, according to the manufacturer, is focused on devices of the hi-end class thanks to the system of machine learning image processing and support for recording Full HD video at a frame rate of 480fps (Exynos 9810 in Galaxy S9 and Galaxy S9 + recall, writes in 960fps with HD-resolution). The new Exynos 9610 is built on a 10-nm FinFET architecture, has four Cortex-A73 cores with a frequency of 2.3 GHz and four more Cortex-A53 cores with a frequency of 1.6 GHz. 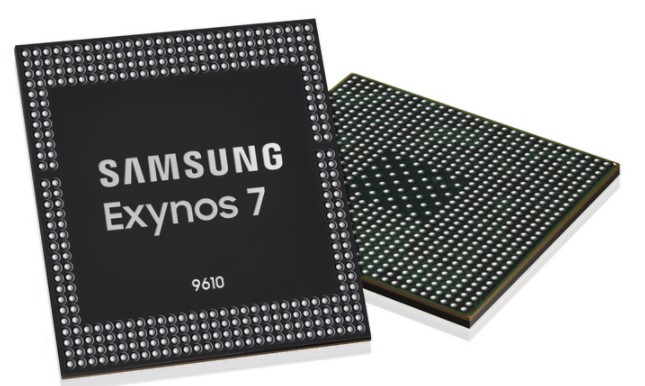 The processor is supplemented with the video accelerator Mali-G72 on the architecture of the second generation Bifrost. The chipset also has a combined modem that supports the LTE Cat.12 3CA standard with a peak download speed of 600 MB / s and a Cat.13 2CA standard with a download speed of 150 MB / s, a set of modern wireless connections, including a Wi-Fi -Fi 802. 11ac 2×2 MIMO, Bluetooth 5.0, GPS, GLONASS, BeiDou, Galileo. Declared improved characteristics of face recognition, effects of defocusing and shooting in the dark at the expense of neural networks.

Mass production of the Exynos 9610 starts in the second half of the year. Approximately at the same time, the announcement of Samsung Galaxy Note 9 is expected (it is unlikely that it will work not on the Exynos 9810), but it is not yet clear exactly which chipset this model is oriented to. Perhaps this is an option for third-party manufacturers, or Samsung will use it in high-level tablets.